Madrid is a city that welcomes all those who come with open arms. In fact, I know few people who have grandparents born in the city. That’s not to say that gatos (natives of the city) are not proud of their history, and of their bars. There’re currently 12 hundred-year-old restaurants and pubs pubs and restaurants in Madrid, some of them with almost 300 years of history. Do you want to meet them?

It all started when the end of the s. XIX. Rafael Fernández decided to open a winery in Madrid to sell the wine he made in Toledo. He even opened up to thirty wineries, but there’re currently four, one of the most famous being at Colón Street. During the 80’s was also introduced beer and installed what today is the oldest faucet of Guinness beer in Spain. And one of the most reputed “tortilla de patata” in the capital.

For better or worse it’s next to the Plaza Mayor of Madrid, which means that there’re always many tourists. Typical rustic restaurant for suckling dinner but somewhat more expensive than average. Although of course, you can say that you have eaten in the oldest restaurant in the world. Opened in 1725, it was one of the meeting places of many writers because of its bohemian atmosphere: Ernest Hemingway, Graham Green, Frederick Forsyth and of course the best Spanish writers. 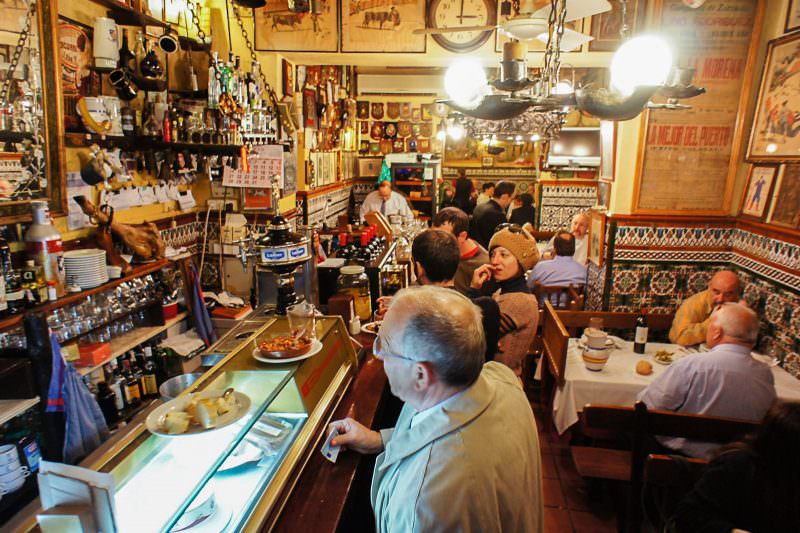 Located near the Plaza del Cascorro, one of the most beautiful in Madrid and starting point of El Rastro. It still has all the charm of the tavern to drink wine tumbler that opened in 1893. It also has a legend: in its 120 years of history no one has been able to finish their “cocido”. Many say it is one of the best cooked Madrid, which is why you must book. They also have a very good “bacalao con tomate” (“cod with tomato”) and “ lomos de bonito con pisto manchego” (“bonito loins with Pisto Manchego”) and a very interesting option of glutten-free meals so that everyone can try the legend.

This tavern is on the ground floor of one of the places where Miguel de Cervantes lived in Madrid. It has all the essential elements of a good tavern in Madrid: original faucet, marble counter, glass jars, etc. The area of the restaurant is very small and therefore it is often difficult to taste their “callos”. Of course, a good vermouth with rashers at the counter is worth the visit. I recommend that you go out of the weekend so you do not have to fight for a little gap inside this local with almost 200 years of history. One of the hundred-years-old restaurants of Madrid not to be missed.

Search in Google “Gambas of La Casa del Abuelo”, and you’ll see why they have been open since 1906. Of course, I do not know if the gambas (shrimps) or salsa are better. So do not be shy when you take a piece of bread and dunk it. Accompany this dish with a sweet wine from and the experience will be complete. It is not the cheapest in the area, but the solera and castizo deco are top. Currently its owners are the fourth generation of the same family.

It’s at Mayor Street very close to the Cathedral of the Almudena, so you can imagine that you’ll find some tourist. Specialized in castizo kitchen, on Tuesdays they serve “cocido madrileño en dos vuelcos”. First the soup and the noodles, then the vegetables and the meats. By meat I mean chorizo, bacon, morcillo, hen … Yes, it’s very complete. And if itsn’t Tuesday, its “gallina en pepitoria” and its “judiones de La Granja” are also two hits.

A few steps from Puerta del Sol, it’s almost always full of people chatting very animatedly. Getting a place inside to sit is mission impossible, but maybe your luck smiles and you get a stool on the terrace. Its speciality? Fish. “Soldaditos de Pavia”, “croquetas de bacalao” and “tacos de atún” are their most demanded dishes. Of course, any of them with Valdepeñas wine. Hey, drink is ordered in desk and food in a counter stand. The only day closed is January 1st.

Opened in 1702 as inn for those who came a few days to Madrid to sell their products from other parts of Spain. The walls are full of food reviews 1.0 style talking about their stews and roasts. It’s quite far from the center, and therefore surely there aren’t tourists. They say that its “perdiz escabechada” (“pickled partridge”) is a must and its “manitas de cerdo” (“pig handyman”) a classic that you have to order yes or yes. By the way, they have a wine cellar with wineries and vintages very uncommon.

It opened in 1839 as a pastry shop, and shortly thereafter it also offered meals. It currently functions as a restaurant with several dining rooms and a grocery store with prepared food. Its decoration has been preserved since its beginnings, so both the façade and the interior look like part of the Museum of Romanticism in Madrid. Its “cocido” (“stew”) has both supporters and detractors, what is undoubtedly is that eating there is quite an experience.

Here the bullfighting atmosphere is everywhere. Its first owners were torero, picador and people of the world of the bull until today. Perfect for tapas and feel the hearth of its more than 200 years of history, almost become a museum. Located in the multicultural district of Lavapiés, it maintains all its solera and castizo atmosphere, being the oldest unreformed tavern in Madrid. My recomendation? Ask for the “olla gitana” (“gypsy pot”) and you will always want to come back. 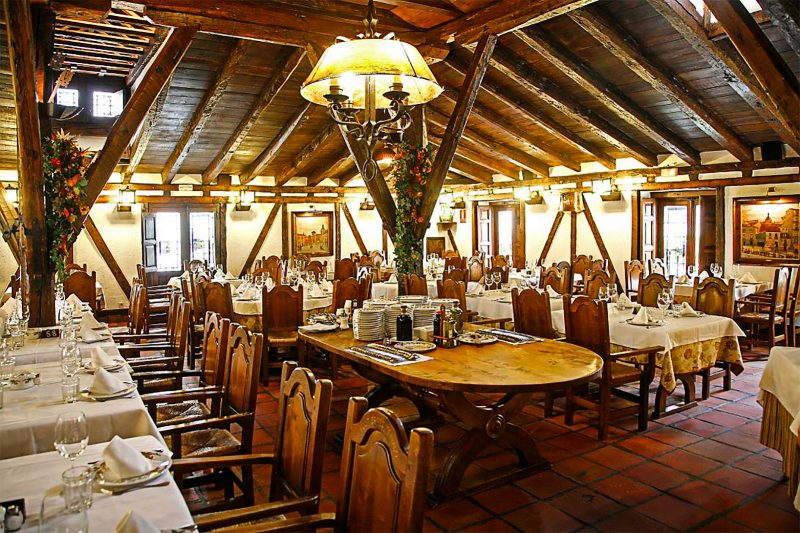 The only restaurant on this list with a Michelin star and with a price more affordable than you might think. It opened its doors in 1642 being the only flour mill in Madrid and later converted into a restaurant. In the middle of Cava Baja Street in Madrid, one of the streets with more restaurants and bars per square meter of the world, its specialty is “asado de codero” (“lamb roast”). They use oak logs and straw ashes, which give a characteristic flavor to their dishes.

Although to speak of a place where you breathed culture, the coffee of the artists by autonomy is Café Gijón. In fact, he even has its own annual prize for a novel founded by Fernando Fernán Gómez. Since 1888 it has been the scene of lively social gatherings ended at night. In the price of the consumption must be included the visit a piece of the history of the world literature. It’s expensive, but you can always have a coffee.

As soon as you live in this city for a while you realize that its streets are breathtaking, even in such modern neighborhoods as Chueca or Malasaña. Whether you live in Madrid or if you are passing through, you have to go to one of these hundred-years-old restaurants in Madrid. They’re like a museum, and you can also eat and drink like a full-blooded Madrid-born!

Translated by Story Of Madrid, the podcast about Madrid in English.