There’re certain restaurants where eating reaches a level of sensory experience. And Coque Madrid is one of those places. I do not say it because it has 2 Michelin stars, but because after having eaten there, I can tell you about my first hand experience and everything they do, there’s spectacular. Do you want to know how the 18 dishes of the Q17+ tasting menu of Coque Madrid are?

First I’ll tell you a little bit of history, because the trajectory of Sandoval brothers could not be explained without talking about their origins. Mario’s grandparents began in the world of gastronomy more than 60 years ago with a eating house in Humanes. There, he and his brothers Diego and Rafael, were learning all the details of the profession, until Mario did a stage at elBulli in 1999 and everything rushed.

On his return he took the reins of the family restaurant with his brothers and only 5 years later they got their first Michelin star. The second one came in 2015 and someone say it’s very likely that they will get the third Michelin star very soon.

Now they have moved from Humanes to Chamberí, specifically to the Marqués de Riscal Street, one of the noblest areas of the neighborhood of Almagro. The move has not been easy. They had to move 13,000 bottles of wine, 2 Michelin stars, 3 M from the Metropolis Guide and 3 Repsol’s Soles. In addition to lifelong kitchen utensils that coexist with torches, liquid nitrogen and other modern tools.

Once you walk through the door you realize that the new place is spectacular. And not only for the interior design of the architect Jean Porsche, which is beautiful. The whole project responds to the process of the tasting menu of Coque Madrid, because it’s eaten in several different rooms. In fact, there’s an open-plan kitchen, but it is not intended only for you to see it. Although I do not want to anticipate anything …

I have seldom eaten such a large menu, and upon arrival I was told to “take it easy”. We were going to take about 3 hours to eat. And no wonder: the Q17+ menu consists of 6 starters, 9 main courses and 3 desserts. The ideal, and what we did, was to make the pairing with its selection of 12 wines. And of course, the experience is amazing.

I tell you the whole process. You start eating at the cocktail bar, with the classic “Coque Club cocktail” accompanied by “bocado de polifenoles con pasas” (“snack of polyphenols with raisins”) and “papa canaria con mojo rojo” (“Canarian potato with red mojo”). This is only the first step and you can already see the essence of Coque Madrid: modernizing traditional Spanish flavors by surprising its customers with very unusual elaborations and textures.

Then they took us to the winery, where in the company of the sommelier Rafael Sandoval, we ate the “crujiente de ibérico” (“crunchy Iberian”) and the “macaron de pimentón” (“paprika macaron”) watered with a “fino” wine freshly served by him. A spectacular space and a delight for the mouth. I had not tasted a salty “macaron” before and it seemed unique and surprising.

We went to the kitchen, where we were delighted with “saam de manitas de cochinilla” (“saam of cochineal handyman”) with a good Casimiro Mahou beer. Apart from the fact that the saam was delicious, we ate it freshly made. So much that you see how the cooks finish the dish, and then they put it on the bar so you can eat it. 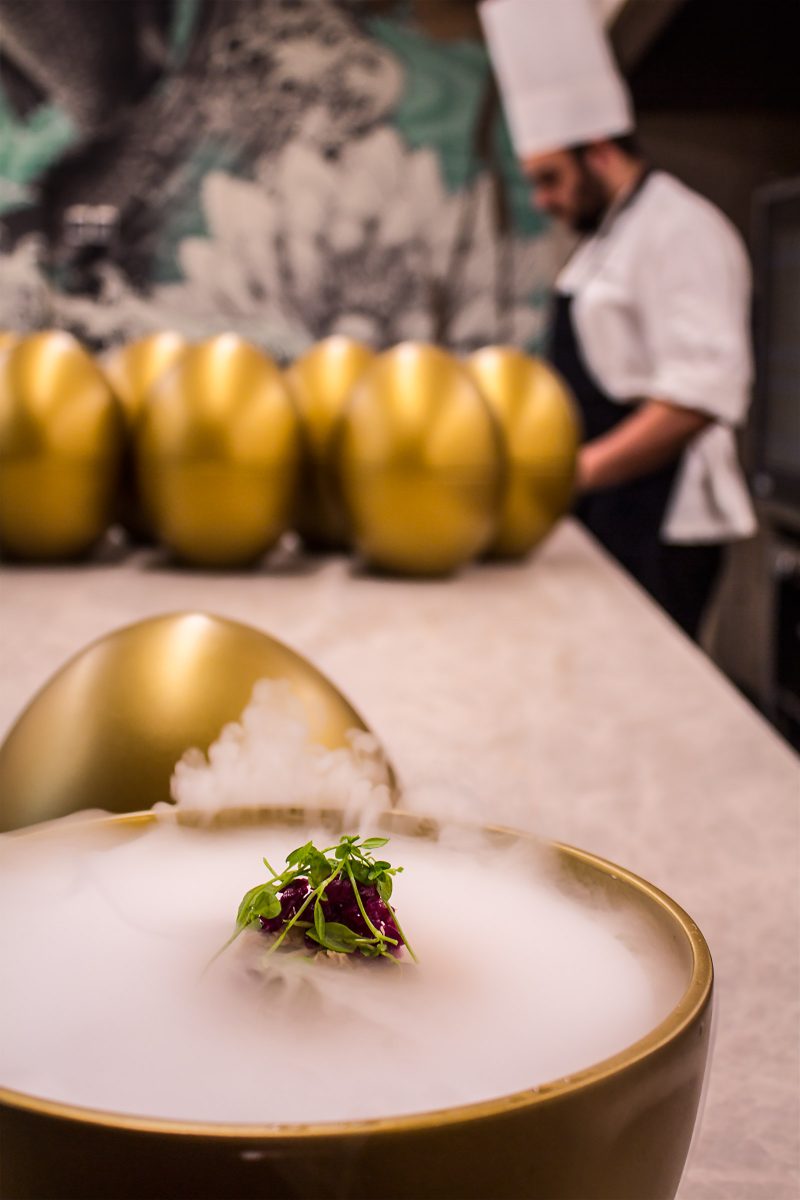 The second dish, “taco de perdiz con chucrut” (“partridge taco with sauerkraut”), is served in another space of the kitchen, where tradition and modernity coexist. That is not a cliché. The holm oak oven where they make the “suckling pig” (one of their most famous dishes) is next to some huge golden eggs that house the taco.

After all of this, Diego Sandoval picked us up and drove us to our tables to try the 12 main courses and 3 desserts. The space has so much personality that it does not matter where you sit down, all have a special touch. In our case it was in one of the tables that there’s in a kind of gallery, where the winter sun filtered through the glass.

The first pack of dishes were “gamba blanca con fritura”, “amanita caesarea guisada” and “gastrogenómica de verduras” (“white prawn with frying”, “amanita caesarea cooked” and “gastrogenómica of vegetabl”). The prawn is eaten whole with a potent flavor and the cooking of the amanita confirms that Coque Madrid dominates the seasonal dishes with ease.

“Gastrogenómica” is a classic that Mario Sandoval was already doing in Humanes and that he has maintained. It’s the result of the culinary research of Coque Madrid and it has won the right to study it in the most prestigious cooking schools. You won’tt believe that it can be made such a delicious dish with only vegetables.

The following group of dishes demonstrates that you can make dishes with perfectly Spanish traditional flavors and astonish diners. As an example, the “escabeche de faisana” (“pheasana marinade”), which is a game of textures with a very fresh flavor and an acid touch of mango that I loved.

In the “cangrejo real con salsa de callos” (“royal crab with callus sauce”) the main dish is fish, but that is not an impediment for its pairing with a very tasty tripe sauce. In fact, having both flavors in your mouth is amazing.

The “papada de cerdo ibérico” (“Iberian pork jowl”) a priori could be the most traditional proposal of the menu, but the textures of all its ingredients and being able to eat them all together in one bite is all a foodie moment. The tongue detects so many different elaborations that you will automatically close your eyes.

The next fish was “parpatana de almadraba”, with a first class raw material. Coque Madrid is responsible for bringing a piece of Cadiz to the neighborhood of Almagro; and the taste of the passion fruit updates this traditional dish and gives it a very interesting counterpoint.

The “piglet” (“cochinillo lacado al horno”) was quite a show. Not so much because the dish comes covered with a bell full of smoke, iit’s because of its flavor. Seldom have I tried such a round dish with so few ingredients. The meat was perfectly cooked, but how crispy they get the skin is honored. And the touches provided by the peach grilled are great.

To top it off, the “lomo de liebre a la royal” (“hare loin a la royal”). It’s a famous meat in many parts of Spain also has its representation in the Coque Madrid menu. Very tasty and with a plating so colorful that it’s impossible to resist taking a picture.

Desserts are sweet, but forget too sweet snacks. The “sorbete de manzana ácida” (“sour apple sorbet”) is super refreshing, and of course, careful to split the “corkscrew” or small pieces will be fired everywhere.

Obviously the “chocolates especiados con sal ahumada” (“chocolates spiced with smoked salt”) are not sweet, but it does not stop being one of the best desserts. Different chocolates that as a whole, have a touch of ideal bitterness. In addition, the plating is funny, it seems a small altar of the “Day of the Dead” Mexican festivity.

The “gató of almonds with thyme cream” (“gató de almendras con crema de tomillo”) sure meets the highest expectations of any Mallorcan. But Coque Madrid is not satisfied with nailing this dessert. Combined with Mahón cheese, it’s a very top dessert.

After all this you can return to the cocktail area for after dinner and discuss which dish you liked the most or go directly to talk to the chefs who are great and answer any questions you have.

Beyond the number of Michelin stars that Coque Madrid has, the truth is that it eats great. Obviously it’s a financial outlay of some importance. But it’s no less true that with the number of dishes that the menu has, all the elaborations and the attention of the entire Coque Madrid team, it is worth it.

Also, keep in mind that there’s a maximum number of 60 people at each meal, which amounts to 15 tables. And there’re almost the same number of chefs and waiters, with more than 1,100 m2 dedicated only to them. Although price is high, is fully justified. For a special occasion I would recommend it without hesitation.

Coque Madrid on our map